This is the third in a planned series of posts about my course ‘Developing Mathematical Thinking’, a maths content elective for pre-service teachers training in primary and middle maths. All posts in the series are here.

It’s been three weeks (how time flies!) since I last posted about this course. There are 1.5 workshops that I haven’t written about. We also missed three classes (1.5 weeks = 3 workshops) due to my travel and illness. We finally got back into the regular rhythm of class last week. In brief, I am not going to write about how we: dug into the importance of multiple representations; tackled our first substantial problem—’How many squares on a chessboard?’—and used it to discuss specialising and generalising; looked at ways to organise our work; talked about the importance of writing down our thinking; introduced the three phases of work (Entry, Attack, Review) and tackled a couple of problems along these lines; started maths talks with a dot talk and then a `duck’ talk. There is too much to write about!

I am continually inspired by the power of the ‘Notice and Wonder’ routine to help in all stages of problem solving, not just when starting to tackle a problem. We spent a few hours in class experiencing different dimensions of ‘Notice and Wonder’, and I hope to summarise our work over a few posts.

In case you are not familiar with it, the ‘Notice and Wonder’ strategy involves asking two simple questions: ‘What do you notice?’ and ‘What do you wonder?’. These are powerful prompts to engage students. ‘Notice and Wonder’ helps lower the barrier to entry for all students. It encourages sense making. Students are more invested because they are connecting their own thinking to the scenario and are generating questions that they are interested in solving. ‘Notice and Wonder’ is enthusiastically promoted (with good reason!) by the team at The Math Forum. For more, read Max Ray-Riek’s post or watch one of Annie Fetter’s Ignite talks: NCTM 2011 and Asilomar 2015.

‘How old is the shepherd?’ — Observing a lack of sense making in others

‘Notice and Wonder’ is most commonly implemented by displaying an image or a video and recording everything that students brainstorm. However, I decided instead to first have my pre-service teachers observe a lack of sense making in others. For this I used Robert Kaplinsky’s video showing eighth-grade student responses to the nonsensical question ‘How old is the shepherd?’. The question here is seemingly straightforward:

There are 125 sheep and 5 dogs in a flock. How old is the shepherd?

Before I showed the video, I asked students to estimate how many of the 32 students they thought would give a numerical — and thus nonsensical — answer. Try it for yourself.

Then I played the video. If you skipped the link, go watch it. It will only take 3:07 minutes. Students were incredulous; they thought the video was a joke. They just could not believe that 75% of the students that Robert interviewed gave a numerical response. Once that moment passed, we spent some time suggesting different reasons why this might happen, including:

Rather than simply laugh at the video (which did happen; sorry), I then focused on the role of teachers in all the reasons we had brainstormed. I emphasised the responsibility that we have as teachers to empower students to question and to make sense of problems. There was quiet in the room as this powerful moment resonated.

This led nicely into the idea of sense making — in all stages of problem solving. For example, the students in Robert’s interview who said ‘Hey, what? I can’t solve this!’ were making sense of the problem at the start of problem-solving: they had thought about the context and realised that it didn’t make sense. We talked about the students who jumped straight into a calculation, and how they hadn’t even made sense of which calculation they should do. (Hint: there is no sensible calculation one can do!)

We also noticed that most of the students who gave a numerical answer did not make sense of their answer at the end of problem-solving, even as Robert probed their thinking. We did note that no students used a multiplication strategy, so presumably there was some sense making in that the shepherd couldn’t possibly be 625 years old!

From here I wanted to draw attention to the value of units in making sense of problems. For example, if students had reflected that 125 – 5 meant subtracting dogs from sheep to get years, perhaps more sense making would have taken place.

‘The flour problem’ — working with units

The best problem that I know to encourage making sense of problems via units is ‘the flour problem’. I discovered this via Fawn Nguyen, who has written a great blog post about how her sixth graders worked on the problem, including a ‘Notice and Wonder’ routine on the top half of the image. 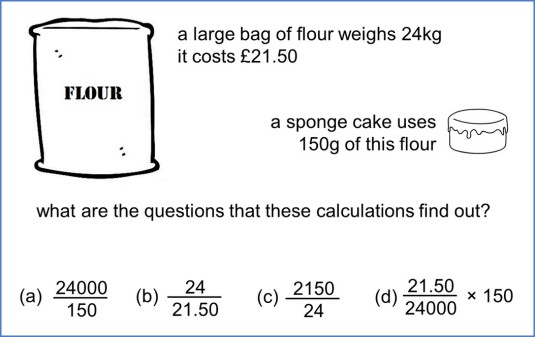 Of course, it’s not just a problem for sixth graders. I have begun using it in the first class of my university mathematics course for laboratory medicine students. (If they can’t make sense of units, then we have a real problem!) I’ve watched pre-service and in-service teachers in my sessions dig deep into this task; it encourages sense making in so many directions. I also showed John Rowe’s makeover of a trigonometry question, which similarly gets to the heart of sense making.

We also briefly talked about estimation as a sense-making strategy: starting with an estimation, and then reviewing any calculations in light of the estimation that we made. This is a theme we’ll return to later in this course.

With such a persuasive start to the importance of sense making, the stage felt ready for students to experience ‘Notice and Wonder’ for themselves. I hope to write soon about how that unfolded.