It was a delight to recently spend five days working with students and teachers in Alice Springs at the invitation of MTANT, the Mathematics Teachers Association of the Northern Territory. I then spent a week in bed with the flu, which is one reason I’ve recently lost my voice (both physically and online).

The main purpose of the visit was to join the 8th Annual Maths Enrichment Camp at Ti Tree School, in a small remote town 200 km north of Alice Springs. Students travelled from all over Central Australia, some from as far as the Aboriginal community of Hermannsburg, 320 km south (that’s a short distance in the Northern Territory!). The camp runs Friday night to Sunday morning, and is full of fun activities (mathematical and non-mathematical) for kids, and teachers, to engage with. This was my first Maths Camp, and I was thrilled to be invited; thanks @matt_skoss!

This year the Ti Tree Maths Camp attracted around 35 students from Years 4 to 10. Students were divided into three groups and on Saturday rotated through four activities, called ‘Worlds’. Thus, these activities needed to accommodate a broad range of mathematical expertise. To add extra challenge, I rarely work with students in the lower years, so I relied on a couple of trusted friends to help determine whether my planned modifications would be appropriate.

In this post I briefly describe how younger students responded to two of my favourite activities, which I’ve previously written about: The Game of SET and Domino Circles. I doubt that this is going to be revelationary to most teachers, but I am always learning how students make sense of mathematics (younger students, in particular), so I want to record my observations for the future.

I worked on this problem with a combined group of Years 5 and 6 girls from Bradshaw Primary School and Araluen Christian College in Alice Springs.

Usually my next question is to ask students to calculate how many dominoes there will be in a set. Some students start by drawing them all out. For this students I might show an image of a Double 18 set—too many to draw, right? This encourages students to find, and then explain, a formula for the number of dominoes in a Double ‘n’ set.

However, for younger students that I hadn’t met before, I was concerned that this question might be too challenging. Instead, I handed out sets of dominoes and asked students to have a look at them. Then I revealed that each set was missing a domino. Could they work out which domino was missing?

As you might expect, students needed to find a way to organise their dominoes so that they could identify the missing one. Several groups made arrangements like this. It’s easy to spot the missing domino now, right? How else could you have arranged the dominoes to make this discovery? 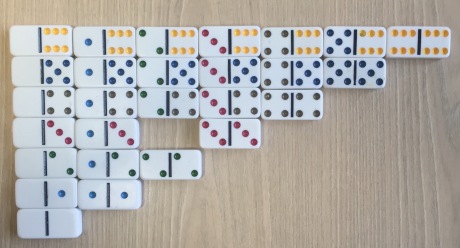 I gave one large group two sets of dominoes (one paper, one physical) in case they wanted to work in smaller groups. I was delighted to find that they instead used both sets of dominoes in tandem. It looked something like I’ve reproduced in the photo below. Can you spot the missing domino from each set? 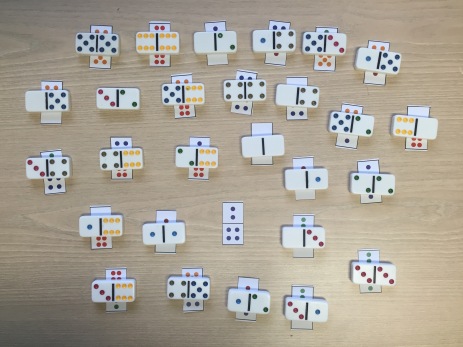 There was an interesting moment in the middle of this activity as we discovered that some sets had more than one domino missing, and some sets had duplicates. (Guess who didn’t double-check the domino sets before starting the activity? <blush>) This could have been a disaster, but I took it as a true problem-solving experience for the group. We sorted out our sets eventually!

The rest of the session was largely spent exploring this question:

Is it possible to arrange an entire set of dominoes in a circle so that touching dominoes have adjacent squares with identical numbers?

You can read more about this problem here.

We finished with a quick ‘Notice and Wonder’ with this short promotional video by Cadbury, in which they set up blocks of chocolate in a suburban street, and knocked them over like dominoes. I wish I could remember all the rich wonderings the students had — they were fabulous!

My chosen activity for my ‘World’ at the Ti Tree Maths Camp was The Game of SET. I’ll briefly recap the game, before talking about how students counted their set cards.

SET is a card game. Three of the cards are shown below. What do you notice?

Students eventually identify a number of attributes of the cards. Sometimes (but not often) they generate more than we need for the game. I acknowledge them and ask if we can focus on four particular attributes: number, shape, colour and shading. We notice that each attribute has three different values that it can take. For example, shape can be ‘oval’, diamond’ or ‘the squiggly thing’.

I confirm that these are all the possibilities of values of attributes. When I work with students in higher grades, my next question is usually as follows.

If a SET deck contains exactly one card of every possible combination of attributes, how many cards are in a deck?

To adapt this question to lower years, I did something similar to what I did with counting dominoes. But instead of removing a card, I asked them to find a way to be sure that they had exactly one card for every possible combination of attributes in their deck.

Their natural ability to group by features that were the same, and to organise in a systematic way, was not unexpected. But I enjoyed seeing the varied ways they went about this.

For example, these two girls made three rows (shown vertically in the photo). Each row corresponds to a colour. Within each row, they grouped first by shape. For example, all the red diamonds, then all the red squiggles, then all the red ovals. Within each shape they grouped by shading. Within each shading they organised by number. One explanation was that, for a particular colour, they knew that there were nine cards for a particular shape. There were three different shapes. So there were 27 cards in one row. There were three rows of different colours. So there were 27 × 3 = 81 cards.

Some students started grouping by colour, but in a different way. In this grid, each row corresponds to one particular shape. Each column corresponds to one particular shading. Each ‘entry’ in the grid contains three cards, grouped by number. There were two other grids like this, each for a particular colour. One explanation was that, for a particular colour, we get a 3 × 3 grid where each entry contains 3 cards. So, each grid has 27 cards. There are three different grids, each corresponding to a different colour. So there are 27 × 3 = 81 cards. 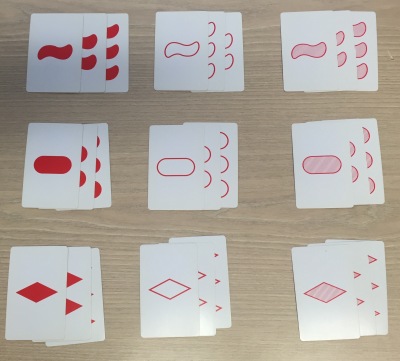 There are four different ways of organising shown in the photo below. In the left bottom half, a student is organising in a way similar to the grid method. Focus on the larger cards in the far right. These girls have nine columns. Each column corresponds to a particular colour and shading combination. For example, the far left column are cards that have purple shapes that are completely filled in. Within each column, they organised the cards in groups of three. The three groups are organised first by shape. Within each group the cards are organised by number. Their explanation is that there are nine columns, each with nine cards. So they have 9 × 9 = 81 cards.

I loved all these ways — and more not described — that students found to count the number of cards they had in their deck. After students had completed their work, we congregated together and went on a tour of the room. Each smaller group explained to the whole group how they had organised their cards and confirmed that there were 81 cards in the deck.

Once students understood how to make a SET, we made a new discovery within their work. Consider again the top cards of the 3 × 3 grid shown below. Each row, column and diagonal forms a SET. It’s like a magic square. A magic SET square.

Meanwhile, the students who organised their cards into a 9 × 9 grid decided to keep their columns the same, but rearrange it so that each row corresponded to a particular number and shading combination. I’ve reproduced it below. With a little bit of prompting from me, they discovered that they had a kind of super magic SET square. Can you see what I mean? So cool!

The rest of the session was spent playing the game, and talking over some of our SET-finding and problem-solving strategies. A rough description is here.

What struck me is that these students’ understanding of how to form a SET was much more solid, and developed so much quicker, than many other older students I work with. This is because usually I explain, rather than have them explore. At Maths Camp I was reminded — again — that even in an activity full of moments for discovery, there are still more opportunities to slow down and let students construct knowledge for themselves.

5 thoughts on “Counting in unexpected ways”