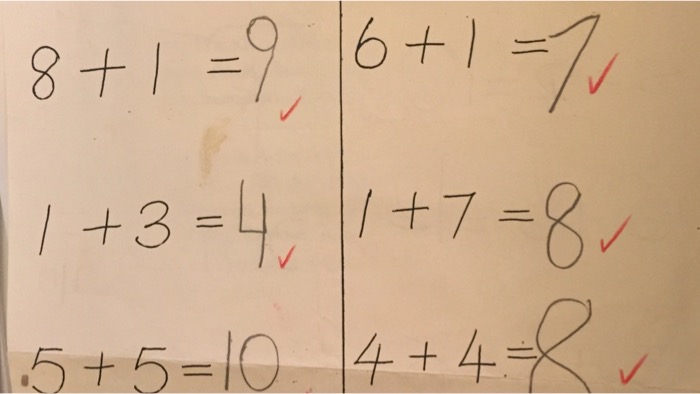 I have always loved maths, but the reasons why have changed dramatically over time.

This is my Year 1 work. It reminds me about what I thought it meant to be good at maths: lots of ticks on neat work, especially if it was done quickly. 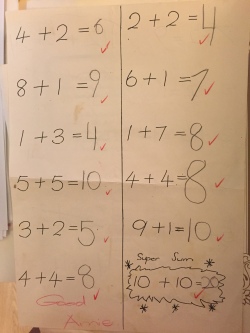 This attitude was reinforced by my report cards in primary school. A typical one looks like this. Note the focus on speed and accuracy. I loved maths because I was good at it.

Our Year 2 classroom had a corner filled with self-directed puzzle-type problems. If students finished their work early, they could go to the puzzle corner. I recall spending a lot of time there (my report says I was put in an extension group). Looking back, I’m sad that not every student had the same opportunities to engage with these richer, stimulating problems.

Outside of school, I loved doing and making up puzzles. I looked for patterns everywhere. I was always thinking about different ways to count, to organise, and to get things done more quickly. Growing up on a rural property, I had a lot of chores and time to think. For example, I’d think about how many buckets of oranges I could pick in an hour, how long it would take us to fill an orange picking bin, the different ways I could climb the rungs of the ladder, and so on. But I didn’t connect these ideas to maths.

Most of my school maths memories involve doing exercise after exercise from the textbook, but that was fine by me because I could put a self-satisfied tick next to each neatly done problem (after checking the answer in the back of the book!). I remember one high-school maths project to work out the most efficient way to wrap a Kit Kat in foil. It stands out in my memory because it was so different to the rest of maths class.

There were gaps in my knowledge along the way that I tried to cover up. I missed a month of Year 4 due to illness, and a substantial chunk of that time was devoted to fractions. When I got to algebraic fractions in later years, I would furtively use my calculator on simple examples to see if I could work out the right ‘rule’. Now I congratulate myself on having the sense to work it out for myself by generalising from specific examples. In Year 12 I felt embarrassed for using straws and Blu Tack to make visualisations of 3D coordinate geometry; everyone else could do it in their heads. Now I’m proud that I found a tool to help me make sense of the maths.

In Year 12 I hit a big obstacle. All my grades went downhill, including in maths. My maths report card says that I was ‘prone to panic attacks when working against a time constraint’. I don’t remember that, although I do remember crying (which I almost never do) in my maths teacher’s office and thinking that I didn’t know anything. I realise now that much of my maths schooling was about memorisation but not about understanding, and that it had caught up with me by Year 12.

Despite my mostly mediocre grades (I got a D in physics!), I did okay and was offered several university places. My love of the English language drew me to careers such as law, journalism and psychology. But I had also applied for and been offered a place in mathematics. Despite this, I chose to repeat Year 12. I took maths again because I still enjoyed it. The second time around it seemed to make a lot more sense; my scores were 19 and 19.5 for Maths 1 and 2. At the end of Year 13 I was awarded one of the first UniSA Hypatia Scholarships for Mathematically Talented Women. This boosted my confidence and made University study more affordable for a country kid. So, I decided to do mathematics. I also enrolled in a computer science major because I wasn’t sure what kind of job you could get with a maths degree.

Most of my undergraduate mathematics experience was the same as high school. I got Distinctions or High Distinctions for all my subjects (except Statistics 3B where I scraped a pass). I did most of my thinking in my head and then committed it to paper. I produced beautiful notes, and would rewrite a page if it had a single mistake on it. On reflection, I had a fairly superficial understanding of mathematics, but knew what to do to get good marks. I got disenchanted in the third year of my four-year degree and briefly considered quitting, but I had never quit something so important so I kept going.

At the end of third year, I had an experience that made me sure I wanted to be a mathematician. I attended a Mathematics-in-Industry Study Group. This is a five-day event that draws together around 100 mathematicians. On the first day, we listen to five or six different companies tell us about a problem they have that needs solving. For example, they might say ‘we want to stop washing machines from walking across the floor when they are unbalanced’ or ‘we want to know the best way to pack apples in cartons’. The mathematicians then decide which problem they want to work on, and smaller groups spend the next three and a half days feverishly trying to find a solution.

It was transformative as I witnessed, first-hand, mathematics put into action. I also saw how mathematicians creatively and collaboratively approach solving problems. I watched accomplished mathematicians initially not know how to start. I saw them making mistakes. They had intense (but friendly) discussions about whether something was the right approach. It was a defining moment, because it showed me how mathematics is really done, beyond learning mathematics that’s already known, or applying algorithms without a sense of why we would do so.  I saw the true habits of mathematicians in action. I also discovered the important role that communication plays in mathematics, and that I could put my love of the English language to good use.

The transition from doing maths exercises with answers that were ‘perfect’ the first time to the more authentic and messy problem-solving required for mathematical research was not an easy one for me. I found it difficult in my PhD to accept that I was not perfect and that I had to constantly draft and refine both my mathematical ideas and my writing, especially because I had never been taught these skills. But I was helped in being surrounded by more experienced mathematicians who modelled, if not explicitly articulated, that this was how mathematicians really work.

I started teaching mathematics during my PhD. At first I taught exactly as I had been taught, with procedures and algorithms. But I also didn’t want to respond to a student with ‘Because that’s the rule’, so I started trying to really understand why maths concepts worked the way they did. I learned so much more about maths when I started to explain it to others. The way I taught expanded to include visual ways to think about maths, a variety of representations and approaches, and other flexible ways of thinking. It wasn’t natural to me at first (and at times I still solve arithmetical problems in my head by imagining a pen writing the algorithm) but it has immeasurably enriched my own understanding of mathematical concepts.

I also realised that the way I was taught was not the way I wanted to teach, but I wasn’t sure how to change that. I sought ideas from the internet, and eventually stumbled into the early days of the online community that is the MTBoS (the Math Twitter Blogosphere), although I didn’t realise that until much later. I lurked for a long time because I felt like an outsider: I wasn’t a school teacher (what did I know about education?!) and I wasn’t located in North America. Today I couldn’t imagine teaching without the support of my professional community on Twitter which extends all around the world.

Around five years ago I decided that I could help break the cycle of traditional procedural-based teaching by supporting students, particularly preservice teachers, in experiencing maths in the ways that I and other professional mathematicians do. So, I designed a course that gives students these problem-solving experiences alongside learning skills for thinking and working mathematically. I hold these word clouds from Tracy Zager in my head as a reminder and a motivation of what I am trying to accomplish. (You can read more about how I found them here.)

I still love ‘cracking puzzles’ in maths like I did in Year 2, but my love of maths has expanded to include learning how others think about mathematical ideas. In almost every class I see a student think about a problem in a way I’d never imagined, and I love it. Listening to student thinking is why I’ll never tire of teaching, and it helps me to be a better teacher. I can’t wait to learn from you.

4 thoughts on “My maths autobiography”